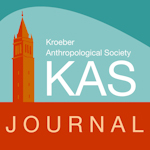 The KAS began hosting annual meetings in May 1957. These meetings have taken many forms over the years: some have included papers representing the spectrum of anthropological interests, others have focused closely on specific topics. Several meetings have been held to honor the scholarship of retiring anthropologists, and one has taken the form of an Ethnographic Film Festival. The most recent KAS conference, "Translocalities: Borders, Boundaries, and the Making of Sites," was held April 2003. In addition to its printed journal, KAS is also now a free, open-access scholarly journal (Fall 2009).