The Journal of Right-Wing Studies (JRWS) is an academic journal operated by UC Berkeley’s Center for Right-Wing Studies. The Center and JRWS are nonideological and seek to promote research, dialogue, and debate on all aspects of right-wing politics, past and present, in the West and around the globe.

JRWS is proud to be an Open Access journal—freely distributed to readers worldwide, and with no economic barrier to publication for authors. We deliver reliable information and analysis about the political right to specialists and the interested public. And we showcase cutting-edge research and engaging writing in an effort to bridge the space between academia and the broader fields of journalism, activism, and public policy.

JRWS welcomes submissions in English on a wide range of modern movements that have historically been classified on the political right, such as nationalism, populism, political realism, fascism, traditionalism, monarchism, libertarianism, conservatism, and an assortment of “new” and “alt” rights. We publish on any topic—race and ethnicity, gender and sexuality, class and markets, religion and culture, media and communications—that touches the right’s mobilization, history, or thinking. We are especially interested in submissions that question the category of “the right,” the relationship among its component groupings and ideas, the right’s relationship to the political left, continuities and ruptures in the right’s history, the meaning of key concepts used to describe the right, and their global applicability. Submissions should be mostly nonquantitative but may be theoretical or empirical in focus. Successful submissions will frame their subject broadly and address an interdisciplinary audience. We expect contributors to come from many methodologies and fields, including sociology, history, geography, political science, political theory, social psychology, international relations, literature, media studies, gender studies, ethnic studies, and religious studies. 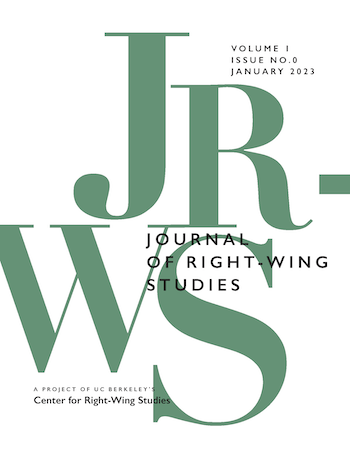