Kinship is the only journal in the United States, and one of only a few worldwide, dedicated to the study of, and research on, the whole of kinship. Ethnography shows there is no known human group without this universal, uniquely human phenomenon called kinship. Kinship is considered both as an experientially bounded, culturally identifiable sphere of human life differentiated from all other societal relations and as a construct with universal analytical value distinguishable by well-defined criteria. Much of the work done throughout the history of anthropological knowledge building is concerned with the study of kinship theory and kinship systems, and many leading anthropologists have made their names in its study.

The journal offers a scholarly site for research publications dedicated to the ethnography and theory of kinship, using both synchronic and diachronic perspectives, and covers current systematic efforts using new data or new ideas, including new tools such as kinship-related computer applications, to revisit and rework earlier assumptions in the field. It covers a wide range of kinship-based cross-cultural practices ranging from incest to marriage to avoidances, to kin terms, to succession, to contemporary forms of motherhood, fatherhood, and family, and more.

Approached from the perspective of the cumulative building of knowledge that is grounded in cross-cultural ethnography and comparative theoretical analyses, kinship is of primal importance in all of the dimensions of humankind -social, cultural, linguistic, cognitive, biological, and archaeological. The journal Kinship, as the design of the front cover seeks to convey, is dedicated to the study of kinship in all of its facets, is international in scope, and will publish original work in English, though publications in other languages will be considered on a case-by-case basis. 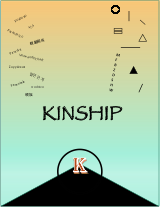