Allonia from the middle Cambrian Wheeler Formation of Utah

Foster, Howells and Sroka report new details of early sponge-like animals from a spectacularly-preserved specimen from the Cambrian of western Utah.

First report of this turtle from the Cretaceous of Alabama, USA by  Andrew Gentry and Jun Ebersole.

A new species of chilodontid gastropod from the Eocene of Oregon, USA by Carole S. Hickman.

Annotated list of the Cenozoic marine formations of the Pacific Northwest by Liz Nesbitt.

Use of machine learning to classify extant apes!

New  study of a subadult skull by P. Ullmann, Z. Boles and M. Knell provides insights into the cranial morphology and intraspecific variation in the Cretaceous pan-cheloniid turtle Euclastes wielandi.

Cimolestids (Mammalia) from the Paleocene of Montana!

New report on Puercolestes and Betonnia, two cimolestids from the early Paleocene (Puercan) of northeastern Montana, U.S.A. by William A. Clemens.

A reassessment by Richard Squires of Eocene warm-water cassid gastropods (Family Cassidae) from North America and implications for their paleogeographic distribution and faunal turnover following the Paleocene-Eocene Thermal Maximum.

Nestling-sized hadrosaurine crania from the Late Cretaceous of Montana!

New protocol for differentiating leporids from the late Quaternary of southern California, USA!

Gonçalves and Sidor describe the new Triassicdrepanosauromorph genus and species,Ancistronychus paradoxus, from the Chinle Formation of the Petrified Forest National Park, Arizona, USA!

Epiplastral shape and geographic variation of Echmatemys from the Eocene of Utah!

The new species Lyropecten terrysmithae from the Miocene of central California!

Powell et al. describe and name a new pectinid, Lyropecten terrysmithae , from the Miocene of California in honor of Dr. Judy Terry Smith for her work on California and Mexican invertebrate paleontology.

Faunal change in Cretaceous endemic bivalves of the northeast Pacific!

New report of the fossil otolith species, Equetulus silveraldensis n. comb., from the Oligocene of the Gulf Coastal Plain, USA!

Groves and Squires present an annotated catalog of Paleogene-Neogene Mollusca from California since Keen and Bentson's 1944 checklist.

Cicimurri et al. report on a diverse fauna of Oligocene fishes from the Ashley Formation of South Carolina, with description of a new catshark species, Scyliorhinus weemsi.

Bonuso et al. use digitized data from the EPICC TCN and other sources to reconstruct Late Cenozoic oyster communities in southern California, USA.

The earliest Ancistrolepis, from the early Eocene of Simi Valley, California, USA

PaleoBios is the official publication of the University of California Museum of Paleontology. It is an open-access, peer-reviewed journal featuring original research in paleontology and related fields. Article access is free to all users. Read PaleoBios online or download individual articles as high-quality PDFs.

Since Michael J. Novacek (1977) established Prodiacodon crustulum, the hypodigm of this species has been greatly increased. Currently, over 100 isolated teeth, but only a single dentulous fragment of a dentary, are known. Reconstruction of its dentition has been based on comparisons with the more completely represented dentition of P. puercensis Matthew, 1929, from younger Torrejonian 1-3 North American Land Mammal Age (NALMA) local faunas of the San Juan Basin, New Mexico. Prodiacodon crustulum is known from the Puercan 3 (NALMA) Garbani Channel and, possibly, Purgatory Hill local faunas in Montana. It differs from P. puercensis in the smaller size of its postcanine dentition and lesser development of minor cusps on the upper and lower molars. Given the uncertainties in reconstruction of its dentition, the new sample adds little toward illustrating the phylogenetic relationships of the species to more recent Paleogene and Neogene leptictids. Recent studies support recognition of the clade Leptictida McKenna, 1975, including the leptictids and the Cretaceous species of Gypsonictops Simpson, 1927. More data are needed to test the hypothesis that P. crustulum is the earliest known representative of the Afrotheria Stanhope et al., 1998.

Isolated tooth plates collected from Paleocene deposits of Alabama, Arkansas, Illinois, Maryland, Mississippi, New Jersey, South Carolina, Texas, and Virginia represent four genera of chimaeroid fishes. Callorhinchus is reported in the fossil record of North America for the first time and is represented by material from the Danian (early Paleocene) of Mississippi and the Thanetian (late Paleocene) of Maryland and Virginia. Specimens from both locations are identified as new species, the Danian C. phillipsi n. sp. and the Thanetian C. alfordi n. sp. New Paleocene Elasmodus records from North America include two partial mandibulars belonging to E. hunteri from the Thanetian of Maryland, and a nearly complete mandibular from the Danian of New Jersey, tentatively assigned to cf. Elasmodus sp. Two species of Ischyodus are recognized, I. dolloi (Danian and Thanetian) and I. williamsae (Danian), but the two species have not been found in the same lithostratigraphic deposits. Edaphodon mirificus is known from the Danian of New Jersey and Mississippi, and the genus also occurs in the Thanetian of Virginia.

Oldest known marine turtle? A new protostegid from the Lower Cretaceous of Colombia

Recent studies suggested that many fossil marine turtles might not be closely related to extant marine turtles (Chelonioidea). The uncertainty surrounding the origin and phylogenetic position of fossil marine turtles impacts our understanding of turtle evolution and complicates our attempts to develop and justify fossil calibrations for molecular divergence dating. Here we present the description and phylogenetic analysis of a new fossil marine turtle from the Lower Cretaceous (upper Barremian-lower Aptian, >120 Ma) of Colombia that has a minimum age that is >25 million years older than the minimum age of the previously recognized oldest chelonioid. This new fossil taxon, Desmatochelys padillai sp. nov., is represented by a nearly complete skeleton, four additional skulls with articulated lower jaws, and two partial shells. The description of this new taxon provides an excellent opportunity to explore unresolved questions about the antiquity and content of Chelonioidea. We present an updated global character-taxon matrix that includes D. padillai and marine turtles known from relatively complete specimens. Our analysis supports D. padillai as sister taxon of D. lowi within Protostegidae, and places protostegids as the sister to Pan-Dermochelys within Chelonioidea. However, this hypothesis is complicated by discrepancies in the stratigraphic appearance of lineages as well as necessarily complicated biogeographic scenarios, so we consider the phylogeny of fossil marine turtles to be unresolved and do not recommend using D. padillai as a fossil calibration for Chelonioidea. We also explore the definition of “marine turtle,” as applied to fossil taxa, in light of many littoral or partially marine-adapted fossil and extant lineages. We conclude that whereas the term “oldest marine turtle” depends very much on the concept of the term being applied, we can confidently say that D. padillai is the oldest, definitive, fully marine turtle known to date.

The heteroconch bivalve fauna of the deep-water (>200 m) Keasey Formation in northwestern Oregon records the Eocene–Oligocene climatic transition and replacement of tropical widely-distributed taxa by the cryophilic taxa that dominate modern high-latitude faunas of the North Pacific. Low-diversity assemblages occur in tuffaceous mudstone and siltstone facies of a deep nearshore basin at the onset of subduction on the Cascadia Margin. Six species of anomalodesmatan heteroconchs have been treated separately, and the remaining Keasey heteroconchs treated here include one basal archiheterodont and 13 imparidentian euheterodonts. The families represented are Carditidae, Thyasiridae, Lucinidae, Lasaeidae, Cardiidae, Tellinidae, Basterotiidae, Mactridae and Veneridae. New taxa include the genus Anechinocardium and seven new species: Cyclocardia moniligena, Conchocele bathyaulax, Conchocele taylori, Kellia saxiriva, Kellia vokesi, Moerella quasimacoma and Saxicavella burnsi. Three species lacking adequate material for formal description are treated in open nomenclature. New features useful for taxonomic discrimination include heretofore unrecognized differences in micro-spines and lamellae on the posterior slope in cardiid bivalve genera and presence of a faint subumbonal ridge in three genera of basterotiid bivalves. Four of the new species are in families in which thiotrophic and methanotrophic chemosymbioses have evolved. Specimens are typically articulated. Shell material is well preserved in the massive units but often chalky or highly altered at cold-seep sites. Fossils are never abundant except for local concentrations in carbonate mounds and associated carbonate lenses, blebs and nodules at cold-seep localities. Multiple lines of evidence of both diffuse and robust flow of fluids rich in reduced compounds are reviewed for three sites where the fauna includes an inner core of chemosymbiotic taxa and peripheral zone of taxa that are opportunistic and tolerant of hypoxia.

In 2013, we curated the Plio-Pleistocene paleontological assemblage of the UCMP South Africa collection and cataloged 5,082 specimens from four primary areas: Bolt’s Farm, Buxton Limeworks, Gladysvale and Witkrans. Both invertebrates and vertebrates are found in the South African assemblage, with every vertebrate class represented, including mammals, birds, fish, reptiles, and amphibians. We provide a detailed report of the taxonomic diversity of the assemblage and describe three sites that have not yet been reported in the scientific literature: New Cave and Jackal Cave at Bolt’s Farm, and Tunnel Wall excavation at Buxton Limeworks. We also offer a historical review of the Africa Expedition and report on the current location of materials collected by members of the southern branch of the expedition and brought to the University of California at Berkeley (UCB) for holding.

PaleoBios is published under the Creative Commons Attribution-NonCommercial-ShareAlike 4.0 International (CC-BY-NC-SA) license. For more information regarding the use of article content visit: https://creativecommons.org/licenses/by-nc-sa/4.0/. 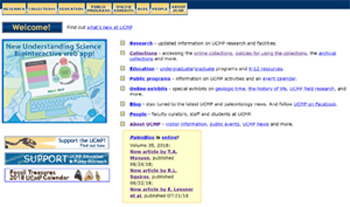 and/or following the UC Museum of Paleo on Twitter  @ucmpberkeley